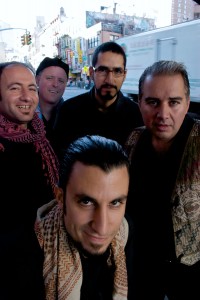 If you ever thought that funk, soul and Arabic music had nothing in common, think again. Better yet, check out the innovative work by this New York-based  multicultural band led by Palestinian pianist and buzuq player Tareq Abboushi, whose influence draws from both the music of his motherland and the sounds of James Brown, Stevie Wonder and jazz-fusion cats like Return to Forever and Marcus Miller, to name a few.

The first reaction to listening to this band is how seamless it sounds. For instance, “Dal’ona” opens with a dexterous bass solo from Dave Phillips that seems to draw from somewhere between Stanley Clarke and the late John Entwistle.  Drummer Hector Morales keeps a steady rock beat, and then the vocals, clarinet and the buzuq come in. All of a sudden it’s like you are transported to a completely different place. “Traveling” goes into a more early seventies funk direction, blending a strong American backbeat with the groove of the Middle Eastern instruments.

Though quite young as a band, Shusmo has received very positive feedback from both audience and critics, and is poised to make its mark in the world music/jazz fusion circuit and maybe even beyond. (Ernest Barteldes)