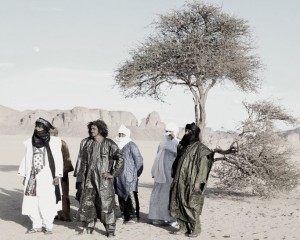 Whether or not Tinariwen, a nomadic group of players from Mali and other nearby desert areas, was influenced by American blues is moot. The group has said its players weren’t familiar with the genre prior to international touring even as just about every writer commenting on the ensemble proclaims Tinariwen the paramount coupling of American blues and African strains. What the West African ensemble does with its music is exhibit the proliferation of black folk music in every culture, drawing from similar rhythms even as melodic progressions differ. Tinariwen’s closest American musical corollary isn’t the blues, but seemingly fife and drum bands, which during the nineteenth century informed the following generation of would-be acoustic country players. Using polyrhythmic concepts drawn from centuries of insular tribal ritual and entertainment, Tinariwen wraps electric guitar around the compositions, allowing for infinitesimal variation. “Aldhechen Manin” from 2004’s “Amassakoul” finds the band accidentally creating what most listeners would recognize as vague references to Jamaican styled guitar, bouncing ahead of the beat while the composition’s bass figure might complement any dub track in recorded history. The song may well have been realized after Tinariwen began its substantial international tour schedule. But seeing as Jamaican expressions of music are drawn from African traditions, the entire scenario remains an endless culture loop. The upcoming “Tassili” finds the desert dwellers graduating to Anti Records, a major-indie label disseminating works as varied as Ramblin’ Jack Elliott and Tom Waits. Inclusion on such a varied roster exhibits not just Tinariwen’s musical accomplishments and the market for such works, but a broadening acceptance and desire to uncover the innumerable connections between African music by Africans and music crafted by Africans in diaspora. (Dave Cantor)