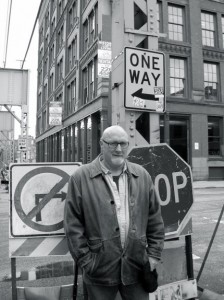 Anyone who knows who Jack Zimmerman is, is already reading this. To any of us lucky enough to know Jack firsthand, he is one of the most fascinating folks we know. For those who don’t know Jack yet, it is impossible to imagine anyone feeling differently once they do.

A Jack of all trades, his bio states that he has been a parking-lot attendant, greenhouse laborer, dock hand, trombonist, college instructor, piano tuner, newspaper columnist, magazine editor and PR man. He also has written two novels. The thread that holds all of this together is that Jack “tells stories.” That’s how he says it, but when Jack tells stories, prepare to laugh your ass off and to be deeply moved all at the same time.

I have known Jack for some twenty-five years now, and thought I knew a lot about him. We worked at several publications together as colleagues over the years, have interacted as journalist and publicist, as journalist and editor, as music lover to music lover, and friend to friend. It even struck me hearing “Wakes” on Jack’s incredible CD “The Gift,” that we had even interacted at the wakes of others, including our own parents. I’ve enjoyed Jack’s books, read likely every column and press release he ever wrote, and yet nothing prepared me for how engaged I was putting on “The Gift” when Jack handed it to me last Christmas, before its public release. I later told him but now I will tell whomever it may concern, it was one of the best gifts I have ever received.

Ken Nordine’s “Word Jazz” came to mind, but compared to Jack, Nordine’s work was aphoristic and avant-garde. The soundscapes are laidback urban jazz, provided by Jack’s son and superb saxophonist Andrew Zimmerman, and form the perfect backdrop for Jack telling six stories about various autobiographical experiences that are quintessential Chicago stories. And as much as I recommend “The Gift” (www.jackzimmerman.net) as an amazing experience to have on your own, one thing even better is to have Jack tell these stories to you himself to the live musical accompaniment of Andrew along with piano and bass.

There have been three such gigs thus far: a small downtown gathering for Jack’s friends, a live performance on “A Prairie Home Companion” from Ravinia last weekend (host Garrison Keillor saw a YouTube clip of Jack doing “Wakes” and said, “I want him, book him”), a Sunday night gig at Haymarket, and this last scheduled live performance before Jack is likely to go back to telling stories just to those of us lucky enough to regularly interact with him. (Dennis Polkow)