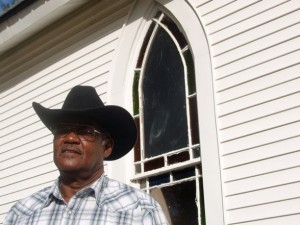 The Rolling Stones, whether purposefully or just as a result of being lazy junkies, made use of more than a couple blues numbers, recasting the works as updated Brit-blues without paying or crediting the composers. Robert Johnson’s family eventually garnered a payday and Rev. Robert Wilkins collected a few dollars for “Prodigal Son,” which was a reworking of his “That’s No Way to Get Along.” Prior to the good Reverend getting the spirit, though, he was just a working bluesman, raising a family which included his son, John. Following a similar path as his father, the younger Wilkins began picking up on music before he was five years old. Acquiring a modicum of his father’s odd melodic ideas, most bizarrely wrought during the introduction to “I’ll Go With Her,” John gigged around eventually returning to the church and helmed Hunter’s Chapel, a congregation in Tate County, Mississippi. He’s been there for more than twenty years, but has still found the time to perform, making appearances at a wealth of blues festivals around the country. Further connecting the younger Reverend to an olde tyme tradition is the fact that he, up until now, has mostly trucked in works from the American songbook, his father’s compositions and church music. With the release of “You Can’t Hurry God,” Wilkins finds himself taking on an electric ensemble, nearing a soul sound even as the singer continues discussing his faith, sins and how to redeem oneself. A requisite cover of his father’s best-known songs will no doubt be rendered live at Reggies, which seems like an odd place for Wilkins to set up shop. But waiting until retirement age to reconstitute his musical presence on a national scale doesn’t count as the traditional way to work a career in music either. (Dave Cantor)