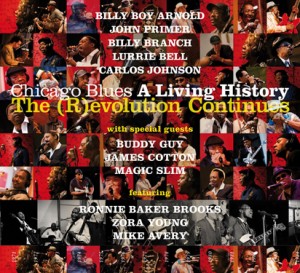 On this great compilation of Chicago blues, a group of local veteran musicians celebrates the legacy of the city’s music with new recordings of classics like Lonnie Johnson’s  “He’s a Jelly Roll Baker” and Ike Turner’s “Rocket 88″ (the tune many consider to be the first rock song) all the way to more contemporary material written in the late eighties.

Over the tracks, the ensemble (which includes Billy Boy Arnold, John Primer, Billy Branch, Lurrie Bell and Carlos Johnson and some special guests) doesn’t try to reinvent any of the music. The versions sound pretty much like the originals—Chicago blues as it’s meant to be played. The album pays homage to many of the tracks recorded on the legendary Chess imprint, including an update on Chuck Berry’s “Reelin’ & Rockin’” that sounds as if adopted by Bo Diddley. Incidentally, he is also remembered on a stirring medley of “Mellow Down Easy” and his signature “Bo Diddley.”

Among the guests who appear on the album is Buddy Guy, who lends his trademark voice and screaming guitar to “First Time I Met The Blues,” a song he recorded decades ago and that is still a regular part of his live sets. Another highlight is Zora Young’s soulful take on “Be Careful How You Vote,” an uptempo tune that warns listeners that politicians are not your friends—once they are elected, “you won’t mean a damn thing.”

“The (R)evolution Continues” is a great document of this timeless genre that came from the Deep South but found a home in Chicago via the likes of Muddy Waters, Little Walter and others. Sure, many of the great blues clubs of yesteryear might be gone now, but this record reminds us of how things were then—and where they are going now. (Ernest Barteldes)