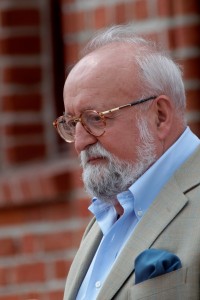 No music more typified the postwar avant-garde movement than that of Polish composer Krzysztof Penderecki. His revolutionary 1960 “Threnody for the Victims of Hiroshima” forever changed the way we thought about what kinds of sounds and sonorities could be achieved on string instruments. (The most famous pop-culture use of the piece was in the film “The Exorcist,” but Stanley Kubrick also used several of Penderecki’s pieces in “The Shining.”)

That experimental period of Penderecki’s style lasted well into the 1960s, culminating in such rebellious choral works as the “St. Luke Passion” and the “Dies irae.” A simpler, more tonal Penderecki style emerged during the 1970s, the composer embracing a neo-Romantic style of writing that colorfully sought to explore post-Wagnerian chromaticism.

By the 1980s, Penderecki began combining the experimental gestures and extended techniques of his avant-garde period with the Romantic expressiveness of the later, more tonal style.

A few months after the Chicago Symphony Orchestra performed Penderecki’s 2000 Concerto Grosso No. 1 for Three Cellos and Orchestra with Charles Dutoit, the composer himself has his say in a rare area appearance conducting this work with cellists Julie Albers, Kira Kraftzoff and Amit Peled as well as the Beethoven Third Symphony, the “Eroica.”

Of course, it’s hardly surprising that a composer who takes up the baton should be able to make a fairly convincing case for his own pieces. But the level of vision, nuance and polish that Penderecki consistently demonstrates as a conductor of the music of others is no less significant. His Beethoven burns with a passion and energy that Bernstein would have been proud of and is insightfully reflective of the identification of the revolutionary of one century with the revolutionary of another. (Dennis Polkow)