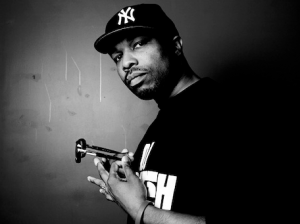 Adding his skills to a litany of hip-hop hits, DJ Scratch has had his name affixed to chart dwellers like Run DMC, MC Shan, Das EFX, Busta Rhymes and LL Cool J. While those folks all count as second- or third-generation stalwarts of the genre, it was during his stint with EPMD that DJ Scratch was elevated from the New York scene to an international stage. First working with the Long Island duo subsequent to 1988’s “Strictly Business,” DJ Scratch was on board for much of the pair’s commercial peak, contributing a bit to the production side of things for the ensemble. His “Funky Piano” even closes out 1990’s “Strictly Business.” As its title insinuates, the funk is present. While an electric key sample takes care of each verse, it’s a guitar sample during the bridge that ranks as the songs most memorable melody. Tossing in a Slick Rick snippet doesn’t hurt and neither does slicing up the vocal amidst the song’s lengthy cutting section. The album as a whole reveals EPMD’s changing sound, making use of smoother drumming as opposed to the sometimes-choppy eighties-sounding samples prevalent on earlier full-lengths. It was this effort, though, solidifying Scratch as top-tier DJ, granting him the opportunity to work tables and boards for a number of commercially successful groups even while doing time with Guru and Pharoahe Monch kept Scratch tied to underground sounds. Live sets, as a solo act, hopefully approach the varied musical landscape he’s worked with over time. As always, the best entertainers are able to adroitly distill any manner of unrelated musics. The Shrine seems as likely a place for DJ Scratch to do that as anywhere. (Dave Cantor)