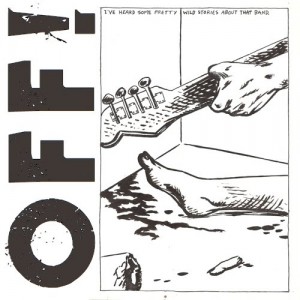 For the better part of the last thirty-five years, Keith Morris has trucked in the most vocally abrasive and primitive forms hardcore’s offered up. Founding OFF! out of desperation and disgust only carries on his mounting legacy. Helping to devise hardcore’s blueprint around Los Angeles’ beach towns with Black Flag has a bit to do with the singer’s audience granting him the ability to recast his music every few years. Counting as one of the band’s pre-Rollins front-men still ranks as the base to an irrefutable résumé. Subsequent to his short stint with Greg Ginn and Black Flag, Morris went and reworked some of that material in the Circle Jerks, a band that was every bit as capable as BF, but wont to toss in a bit of sardonic wit largely absent from early era hardcore bands more concerned with Reagan than yuks. Convening OFF! seems to stem from the same frustrations which birthed the Circle Jerks. Whatever the interpersonal situation with assorted Jerks, Morris began writing material for a recording which accidentally became the bedrock for the newly minted OFF! recordings that were issued last year. Compiled for digital distribution, Vice Records swooped in to release the cleverly titled “First Four EPs.” Any selection from the sixteen-track, seventeen-minute album becomes difficult to differentiate from Morris’ other groups, each potentially arriving as a coulda-been unreleased track from the late seventies or anytime during the eighties. No one expected dramatic steps forward. Hardcore and punk don’t beg for new derivations, but when a performer orchestrates another spew-sputtering slab of perfect simplicity, it should be noted. While Morris and company are slated to make an appearance at Pitchfork, catching the four-piece at Reggies is going to provide a more intimate and ultimately less ridiculous setting to witness a piece of living history shuttle into contemporary punk. (Dave Cantor)