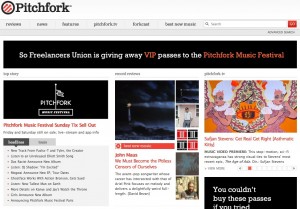 In the world of independent music and its plethora of new artists, genres and stories, Pitchfork collects and organizes it all in a systematic way. Its signature youthful, comprehensive and sometimes perplexing style has entranced millions of indie fans. Its writing, however, can also be hard to swallow (or stand, for some).

When looking at the works of Pitchfork, it’s easy to become overwhelmed with detail. Some call it pretentious, others introspective. Education, or at least a background check, is a foundation of the reviewers. Piles of comparisons to other artists, the more obscure the better, seem to be a favorite tool of Pitchfork critics. Heavy descriptors are thrown around, in a hit-and-miss fashion, as some vocabulary (like “90s buzzbin”) is cleverly tailored to recount a sound, whereas others ( “laconic” is a site favorite, as is “clear-eyed”) might require some serious contemplation.

Above all, the website exists as a springboard, if not the entire pool, for opinion. It is a criticism machine.

As such, much public trust is placed in the Pitchfork stamp, and the claims that these writers make are almost guaranteed to have a significant effect. Reviews from Pitchfork have been known to make or break artists. Arcade Fire, for example, received a 9.7 rating on their debut album “Funeral” back in 2004. Before long the album became the first from Merge Records to hit the Billboard 200. Six years and two albums later, the band parades around with a well-deserved Grammy on their proverbial mantel.

So, clearly, Pitchfork knows what they are talking about and they have flawless taste. Whether this is true or not is up to the individual, but the numbers don’t lie.

Or do they? Possibly, in the case of the ratings system. If the website existed solely to dole out opinion on music, the system in which they function would be uprooted. The Flaming Lips’ 1997 concept album “Zaireeka” was slapped with a 0.0/10.0 and purposefully blasted both the band and its followers. After a severe backlash, the website removed the review and later praised it for its exploration of genre. Perhaps Pitchfork cares more about the approval of the audience than the indestructible opinion of its critics.

The ratings themselves make a case for Pitchfork’s simultaneously accessible and elusive style as well. Fractional numbers sit at the top of each article, taunting the reader with the possibilities of what they could mean. There is no key to the ratings system on the Pitchfork website, which leaves everyone for themselves. But, aha! Within the depths of the internet lies a hidden map to this maze.

It’s difficult to believe that a few simple adjectives could represent all dimensions of an opinion. A 7.9 may be hazy in meaning, but it does provide easy shorthand to opinion. The actual review explicates in traditional Pitchfork analytical style, but there are likely many readers who simply use the numbers to gauge the quality of an album or song. By also leaving the system undefined today, it automatically gives the review itself more credibility. Writers don’t need to adhere to that one adjective, and readers have individual expectations for the article.

As the media industry continues to be sucked into the black hole of the internet age, Pitchfork seems to be one of the few companies not just able to hold its own, but to full-on take the reins of its situation. After all, they’ve learned to be unbound by the past—not only of their forebears but of their own as well.