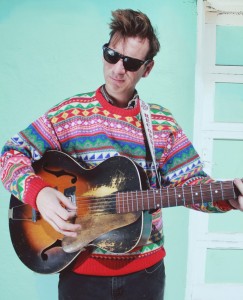 “There’s a cumulative mass that creates something,” says Sonny Smith, frontman in Sonny & the Sunsets, about the benefit of performing at the Pitchfork Festival last summer. “It’s not black and white.” At the time his Bay Area quartet hit the stage, they’d already issued a long playing album, “Tomorrow is Alright,” through Soft Abuse.

“It’s hard to know how that domino effect works,” he continues. “I had a tour with Neko Case, an opening slot in about 2006. I was on NPR, too.” It seems dogged effort as much as random happenstance had to do with getting signed to Fat Possum for the band’s latest full-length, “Hit After Hit.” That new disc doesn’t stray far from the Sunset’s earlier fare, just continues to channel fifties vocal groups, funneling it through seventies pop simplicity and into the new millennium with an independent fervor.

The sensibility is partially due to coming out of the Bay Area, where Smith grew up. And while there’s no real NorCal vs. SoCal attitude running rife through the underground, the Sunset’s instrumental “The Bad Energy from L.A. Is Killing Me” might lead some to believe otherwise. Assumptions, as they often are, don’t make hay.

“I actually heard a teenage girl tell her friend that on a bus after she got off her cell phone,” Smith says of the song’s title. “It was just a funny saying and I had this instrumental with no lyrics to cue the title.” Regardless of where the song’s name springs from, its shimmying two-step details Smith’s desire to continue playing vintage rock ‘n’ roll which he’s been perfecting for decades. A soundtrack quality is prominently displayed in the song’s heavy bass and coltish drums while guitar feedback functions as the song’s main voice. There aren’t any revelations to be uncovered or new trends discerned. Just an ample update.

“Everyone knows about the Los Angeles industry beeswax,” Smith goes on. “But it can’t be too much different from the bullshit in Brooklyn or wherever.” He’s right, but luckily, both those places, as well as Chicago, have been receptive to the Sunset’s brand of retread revivalism. (Dave Cantor)