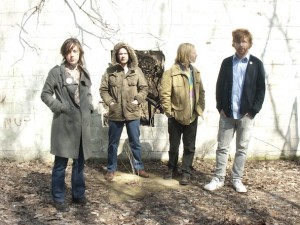 Following Jana Hunter through her folksy stage as a solo act and into Lower Dens illuminates a few trends eventually merging. By the time Hunter’s simple but not straightforward acoustic work began back in 2005 and shuffled forward for two years, the oddball folk thing had run its course. During the same period of time a countless number of beach-referencing slackers showed up in bands as far reaching as Woods and Wavves. Taking a penchant for matching her truly unique singing voice to some electric instrumentation, Hunter went and picked up players after a move to Baltimore. Lower Dens issued a self-titled debut last year, inculcated by jangly pop and a notion about using as few guitar chords as possible. While that description might sound like just about every band on tour this summer, Hunter is able to coax her group through straight pop numbers as evidenced by “Batman,” a recent single, but also works bordering on minimalism run through rock’s google-eyed gaze. “Tangiers,” from an earlier slab of vinyl, begins with a passage befitting the Feelies at their jangly peak. Where that band might have played with pacing, Lower Dens contents itself with circulating an easy bass-line over and over again, allowing a lovingly ham-fisted guitar chord to function as the composition’s bedrock. Hunter has always been aware of her voice being akin to, if not easily trumping, any other instrument. Here, again, she’s able to whisper the right few words, weaving around that single guitar chord until it seems the vocal is the only thing actually moving. Forget the fact that whatever low note Hunter searches for towards the end of “Tangiers” eludes her. The accident summons a stoned Nico. And if that’s the heartiest criticism one’s able to muster, it seems Lower Dens should only continue to succeed in solemn terms. (Dave Cantor)