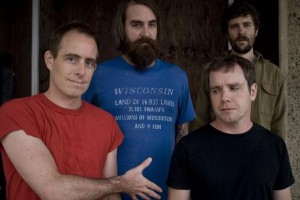 “I’m so sick of cynics, I want something to trust in,” Ted Leo bemoans on the third track of “The Brutalist Bricks,” the band’s 2010 release. More than anything, the line  captures Leo’s ability to effuse the enthusiasm and optimism inherent to punk kings like Joe Strummer and Ian Dury, while incorporating the eclectic influences that made them great. Certainly, recent years have seen him dialing back the style-hopping and indulgences of prior releases. Songs are streamlined, packing precise, catchy riffs into two minutes, where they would have taken twice that time on earlier releases. This only allows Leo to highlight one of the group’s greatest assets, succinctness. He can pack leagues of information into a few well-chosen, inch-long lines, and he proves it on “Bottled in Cork,” which entangles international politics and a startlingly detailed travelogue with a catchy hook. The song, which mentions cutting out political pork, could as easily be applied to the philosophy of the Pharmacists, who have cut away any fat still clinging to their lean sound. What’s left is propelled by the economic bass lines of new member Marty Key and the unimpeachable percussion of Chris Wilson. Yet, the band still  manages to encompass influences from reggae to calypso (the album’s opener is fittingly titled for the Mighty Sparrow). Perhaps it’s due to the band’s constantly rotating lineup, but Ted Leo and the Pharmacists have yet to lose the enthusiasm essential to their appeal. Their most recent album opens with Leo singing about an explosion in a café, and he sounds more emphatic than ever. (Mike Gillis)