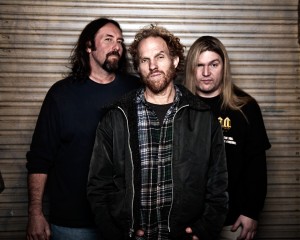 Pretty much every band proclaims that the recording of a new album entails trying something utterly new. For the most part, that’s nonsense. North Carolina’s Corrosion of Conformity, as its name hints, actively works towards confounding listeners, moving from its early thrash to metal and, as of 2005’s “In The Arms Of God,” even including a bit of funky percussion from Stanton Moore, best known for his contributions to NOLA’s Galactic. Despite the endless procession of stylistic shift-ups, COC’s still best remembered as being one of the early eighties’ metal/hardcore crossover provocateurs. 1983’s “Eye for an Eye” put the Southerners squarely at hardcore’s apex, drawing from the harDCore thing in the nation’s capitol as much from delinquent skateboarders on the West Coast. “What?,” from the band’s first record, digs into a mid-tempo allowing for bassist Mike Dean to turn in a surprisingly melodic performance as Eric Eycke, COC’s first singer, who only lasted this one release, grunts along. A few efforts hint at an ever-encroaching metal tinge, but it wasn’t until 1985’s “Animosity” when the influence became clearly focused. Rerecording “Positive Outlook” with drastically different vocals points to the band’s utter embrace of squalid metal, not dissimilar from “Kill ‘em All”-era Metallica. The guitar solos just weren’t as impressive. Continuing on through the eighties and beyond commercial radio’s flirtation with alternative musics, COC found itself tied up with Sony and Columbia Records at different points in its career, eventually wriggling out of contracts. The band continues to be embraced by fans of aggressive music, the point made clear through some lengthy contributions to Steven Blush’s book “American Hardcore,” which could have pretty easily dismissed the ensemble as metal dudes who just happened to be around, copping the speed and adrenaline of Bad Brains’ heavier moments. (Dave Cantor)