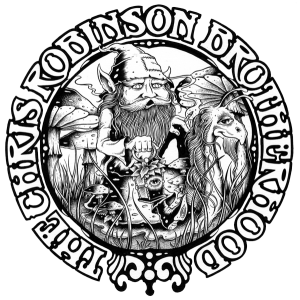 Even a cursory listen to the Black Crowes’ 2009 “Before the Frost” and its countrified companion “Until The Freeze” displays a Chris Robinson with a somewhat diminished singing voice. He retains a noticeable stash of Georgia in his performances, what Mick Jagger was angling at fifty years ago. The various incarnations of Robinson’s other road bands, each basically modeled on his best-known group, have steadily moved away from anything resembling concise song-craft, further embracing a stoned seventies vibe, working Grateful Dead covers into live sets. New Earth Mud, Robinson’s first post-Crowes ensemble, issued a few well-received albums, toured to its fan-base, but was supplanted by a brief Crowes reunion, resulting in the aforementioned recordings. For the Chris Robinson Brotherhood, its namesake picks up a few session players and a disenfranchised guitarist from Ryan Adams’ Cardinals. Basically, Robinson again creates a musical atmosphere capable of reigning in his most hippiefied inclinations while still dispensing sturdy hard rock. With a career pushing back to the eighties, the singer’s prodded a pretty simple formula, ably augmenting what’s expected in as many ways as possible. Robinson’s writing explores various relationships, including a more sedate, family-oriented lifestyle. The fact that he can make even those less-intriguing ideas something of an exciting musical experience speaks to his abilities as a songwriter and band leader. Of course, there haven’t been any surprises, maybe ever. So, heading out to see the Brotherhood, which is as creepy a name as the Georgia native could have chosen, should suit anyone who still tosses on those fifteen-year-old albums every once in a while and finds blues progressions and noodled solos to be the highest fare on the summer’s parade of bands heading through town. (Dave Cantor)