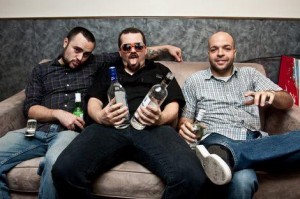 The Miami four-piece Torche is one of those “Dirty Southern” metal bands that can easily be filed alongside the likes of Baroness, Mastodon and Kylesa. What these bands have in common is that they are all unashamedly heavy, with their feet firmly planted in the sludge metal genre, but are progressive enough in their outlook to engulf myriad other influences to create a sound that appeals beyond the typical metal fan base. Torche’s crushingly heavy drop-tuned riffs and thunderous bass parts, which have made up their back catalog, blend with a sense of melody and pop sensibility that makes their songs exceedingly catchy. Steve Brooks’ multilayered vocals, which are a sung bellow rather than a raspy yell, weave in and out of the music to complement its fullness. “To me, it’s mostly a combination of everything we listen to collectively as a band. We take what we like from what we grew up on and use it as creatively as we can,” Brooks explained in an interview with Decibel Magazine in 2008. “I think the meshing of different sounds comes naturally just because we all have different musical backgrounds yet have a ton of common interests.” Nowhere is the dynamic nature of Torche more evident than on the last two tracks of their latest release, “Songs for Singles,” which came out in 2010 on Hydra Head Records. “Face the Wall” and “Out Again” both slow down the blistering pace of their trademark two-minute-long songs to create drawn-out, epic record closers where the true intricacies of their musicianship can be heard. The EP was originally intended as an album but had to be stripped back and simplified when the music arrangements they had written for the record were too saturated to fit vocal parts. It provides an exciting stopgap between 2008’s”Meanderthal” and their future, third full-length. (Ben Small)