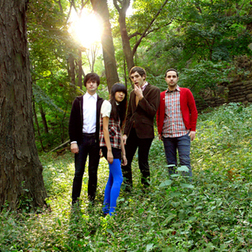 When I first heard the Pains of Being Pure at Heart at New York’s South Street Seaport in the summer of 2009, I dismissed them as Jesus and Mary Chain ripoffs who produced a cutesier, lower-quality fuzzy pop than the bands they imitated. Pitchfork’s review of the band’s “Slumberland” self-titled full-length anticipated my reaction, saying critics shouldn’t claim the “past has some sort of patent” on the kind of “sparkling melodies” and “mopery” the band combines. The choruses were catchy, the sound was lo-fi and layered, and the guitars were jangly (which are, usually, all good things), but I was turned off by a somewhat tentative live performance. I decided to revisit them with the release of their full-length, “Belong”—it’s more polished and atmospheric-sounding than its predecessor, but it maintains the sweetness of the band’s debut, which, upon more recent listens, I’ve begun to appreciate for its simple sincerity. (Rachel Lazar)