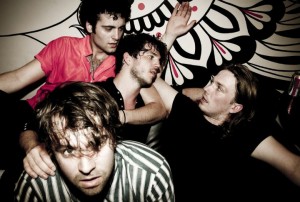 Since they first performed live during the last quarter of 2010, folks might be wondering how the Vaccines recorded an album and got slotted into Lollapalooza. In part, the British band’s story’s tied into the digitized world, with the internet providing ample marketing opportunities. But really, the Vaccines understand how to put together simple rock songs drawing from ever-hip sources. Some of frontman Justin Young’s phrasing reeks of Morrissey, but fitting that into a supremely stripped-down rock ensemble seems to work relatively well, if not coming off like the tenth iteration of the Strokes with Brit accents. “All in White,” the band’s second single from “What Did You Expect from the Vaccines?,” veers from a staid three-chord formula, taking on rolling drums and some ballad-esque moments. But it’s during the Vaccines’ most reductive compositions when the band’s spit-take on American punk works best. Upcoming single “Norgaard” clocks in at about ninety-eight seconds. It’s all sixteenth-notes on the high-hat as the circular chord progression repeats itself into oblivion. Keeping the Vaccines from actually falling into the dreaded punk category is their investigation of melody, not just on the lead guitar, but in Young’s singing. As the face of the band, Young keeps a rock tradition alive by discussing nothing other than sex. Fine. Sometimes songs are about proper relationships, but maintaining those relationships and getting laid are the impetus for approaching such subject matter in the first place. “What Did You Expect…” serves as a strong opening salvo, but if listeners have to wait a decade to hear another few decent songs, à la the Strokes, the Vaccines might wind up being the punch line to a few jokes in the future. (Dave Cantor)