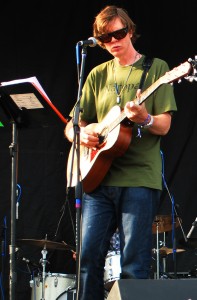 “Everyone’s wearing them these days. Umbrella hats, hats for the heat. One size fits all” —Old man in suit and rainbow umbrella hat standing outside of the festival gate.

“I think I saw that shirt at Urban Outfitters”

“We’re only quiet because you’re a god!” —shouted to Thurston Moore, onstage

“I have honey if anyone wants to get sticky” —Thurston Moore, onstage

“You want to hear songs about rape and incest?” (Crowd applauds). “Alright, I’ll do my best” —Thurston Moore

“That’s Dimitri Coats on guitar, Mario Rubalcaba on drums, and beautiful girl in the front row on iPhone” —Keith Morris of American hardcore band OFF!

“I’m about to ramble. I ramble when I’m nervous” —Erika M. Anderson, lead singer of EMA

“This is weird. It’s like you’re watching me get dressed” —Merrill Garbus, aka tUnE yArDs, to the audience as she synched up loops before her show