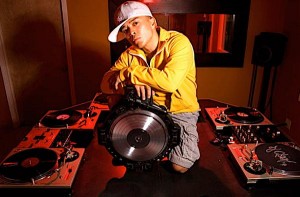 The first exposure most of the world had to turntables being used as a way of creating new sounds, as opposed to simply spitting out pre-recorded music, was during Herbie Hancock’s 1983 Grammy performance. The pianist’s band included DST, a NYC DJ. On the troupe’s rendition of “Rockit,” from Hancock’s “Future Shock” album, DST found himself functioning as the bridge between sections of the song while also contributing a bit of rugged ambiance to an otherwise synthetic-sounding work. A few years later, not necessarily in response to the televised appearance, but an historical extension, a malleable conglomerate of DJs with Filipino ancestry began performing in the Bay Area. When discussed in hip-hop’s context, San Fran and Oakland usually summon names like Mac Dre, Too Short, or Hieroglyphics. But it’s arguably the Invisibl Skratch Piklz, which included DJ Qbert, Mix Master Mike and a weighty, rotating cast who have come to inform international sounds. Qbert, perhaps best known to rap fans detached from turntablism as Kool Keith’s associate on “Dr. Octagonecologyst,” worked with the Piklz through 2000, when the group amicably disbanded. Since then, he’s continued to tour, lectured a bit and refined his musical language drawn from cartoon samples, dusty breakbeats, eighties-styled production and, of course, a surprisingly deft approach to scratching and cutting-up music. Considering how oblique Qbert’s practice is, the commercial application of his music, beyond work behind the scenes, has been scant. Surely, there are a wealth of recordings, some reaching back to fifteen years as with “Demolition Pumpkin Squeeze Musik,” extolling Qbert’s rhythmic understanding as something beyond most people. They just don’t chart, nor are they intended to do so. Separating these Bay Area sonic excursions from shiny-shirt-wearing Euro-DJs is the music’s ability to cull upon the genre’s history, breakdancing and, in Qbert’s case, a desire to slip in everything from sci-fi snippets to women voicing physical pleasure. (Dave Cantor)