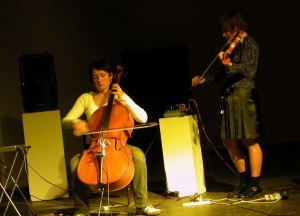 On 2009’s “The Amber Sea,” Myrmyr, an East Bay duo made up of Marielle V. Jakobsons and Agnes Szelag, explores space and a wealth of possibilities gifted through electronic processing techniques. While not a difficult listen or remotely stuffy, the six compositions offered a somewhat academic take on new music—Jakobsons being schooled at Mills College makes sense after hearing the disc. Earning positive responses from the album, which was after all an interesting confluence of occasional accordion, tiny instruments, strings of every variety and distant vocals, still finds “Fire Star” a surprising, and welcomed, extension of the duo’s vision. This newer disc, released through Brit imprint Under the Spire Recordings, bears the mark of its surroundings. Holed up somewhere in Northern California, Myrmyr recorded “Fire Star” in the middle of a snowstorm, making the solemnity of its opening three-track suite even more stoical. Over the course of “Hot Snow”’s development, listeners take in the heaviest bass a viola might dispense while underpinning various plucked strings and plunked keys. Some inevitable scrapped metal as sonic coloration can’t distract from the seemingly random whirring noises and eventual handclaps—perhaps accidentally referencing IDM’s faux organics. Three longer tracks follow the opening trilogy, each capable of soundtracking something like “Chucky” meets “Toy Story.” Further distancing Myrmyr from contemporaries engaged with whatever counts as experimentation are Jakobsons’ and Szelag’s penchant for layering proper pop melody over some of this latest album. There’s not blaring distortion or an overabundance of electronics, although, the latter is clearly in play. Myrmyr might not be actively searching for a way to extended art music’s practice to a realm of the hummable tune, but that’s what happened. (Dave Cantor)