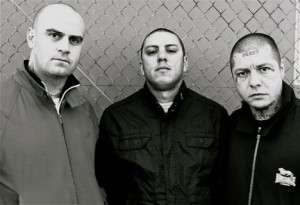 It’s amusing to see the East Bay punk and hardcore scene dating to the late-eighties be maligned in such a wide range of publications. Alright, Green Day has turned into something it was never intended to be. And while Rancid has been working the same basic formula for almost twenty years, the band and its cohort helped create a marketplace for books like “We Never Learn,” which partially details garage rock from roughly the same time and place while dumping all over Lookout! and Epitaph bands. Whether or not appropriating punk from its English conception has merit is moot. Someone seems willing to buy it in perpetuity, so it’ll be around. Rancid’s guitarist Lars Frederiksen seems aware of that, accounting for his excursion heading up the Bastards and now the Old Firm Casuals, its name vaguely referencing a Cockney Rejects’ track. Frederiksen’s embrace of skinhead culture, Rejects’ name-check notwithstanding, came to recent fruition on a split single with long-disbanded Britishers Last Resort. Functioning as something of a sponsor for forgotten Oi! bands continues on Old Firm Casuals’ current tour with a Philly digging up North Carolina’s Patriot as support. With skinhead crowds massing, it should be reasonably clear that Frederiksen’s ensemble isn’t slated for the same sort of international influence as Rancid. Old Firm Casuals’ blatant borrowing  of “Clash City Rockers” for its “Apocalypse Coming,” though, confirms all those speculations about Rancid being an updated version of the Clash. Opening for Frederiksen and company in Chicago are a few out-of-towners in addition to Fear City, a local group, trucking in 4-Skins’ covers and tough-guy stances. It’s difficult to denigrate a group, any mentioned above, and its musical prowess when the form being mined is so basic. But that’s the point: No mess, no fuss. Just pure impact. (Dave Cantor)