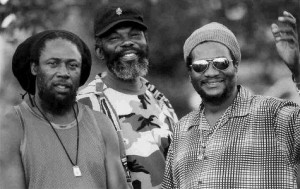 Running into each other at various studio tryouts during the early seventies, Ansel Cridland, Danny Clarke and Winston Watson formed the Meditations in 1977 after recording a handful of reggae singles under individuals’ names. The decision to form a roots vocal trio came about as much from complementary styles as it did out of necessity. Songs like “Rome” and “Babylon Trap Them,” issued as solo endeavors, garnered chart appreciation in Jamaica. Seeing as the trio had contributed work to each in some capacity, the one-off songs were compiled and eventually released as “Message from the Meditations.” Brought out during the second golden age in Jamaica’s recording history, the cobbled-together album plays a bit flat despite the strength of its individual compositions. Using a wealth of different backing bands didn’t help much, but for the group’s next effort, 1978’s  “Wake Up,” a concerted sound emerges, one darker and more textural. Increased political strife on the island concurrent to the album’s release accounts for some of those sinister-sounding efforts. “Stoning Me Away,” an airy funked-up Jamaican dance tune, mitigates the heavy air, while works focused on religiosity and police harassment of Rastas pervades a good portion of the album. “Being a Dread is No Crime” explores the changing landscape this trio traversed as it performed in some rough settings, even as the ensemble cultivated an international following, in part due to the Meditations singing backup on a few Bob Marley tracks. All those troubles are behind the group, if not the island, and everyone’s voice has changed a good deal over the last thirty years. Falsetto might not be a featured component of the group’s performances any longer. But even if the Meditations pull from newer recordings, like the Easy Star All-Stars assisted “Ghetto Knowledge,” there’re enough late seventies hits to make up a convincing set. (Dave Cantor)