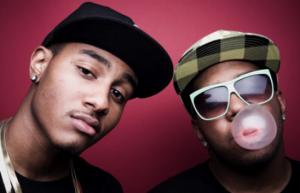 Sir Michael Rocks and Chuck Inglish are known in the music world as The Cool Kids. Like, in high school, maybe they had their own lunch table, trading elaborate handshakes and belittling smaller students with lightning stares. These two, however, are another kind of cool. In both style and sound, these guys thrive on being uncomplicated, bright and laid-back.

“When Fish Ride Bicycles,” the duo’s new debut full-length album, builds on a foundation of earlier music distributed via MySpace and various blogs, making it widely accessible (and yet still partially underground).

These two produce hip-hop songs, but not the over-produced stuff you’re hearing on the radio. This is hip-hop that allows each part of the song structure to have its moment. Beats, tones, and words shine individually, yet don’t outshine each other. These guys disrobe the genre down to its bare, Korg-infected bones; its true roots.

They also make sure not to get entangled in thinking too much. “I don’t even know what it sounds like,” admits Inglish. “Making music is fun. It was the kind of fun to take your mind off the other shit that’s going on around you.” Inglish also noted that when many other artists create their music, “…they make their feelings transparent. With my music, I kind of hide out sometimes. I make sure I have a good time.” The result is a simplicity that can be appreciated for both its homage to the past and its nod to the future.

Some critics have dubbed them part of an evolving Chicago sound. “We just make what we make as a valid sound,” Rocks says. “We don’t think about it too hard or put any limitations or certain details in my music to make it, like, from Chicago. That’s where I’m from, that’s where I grew up, so those influences will definitely be there.”

“When Fish Ride Bicycles” recently broke the Billboard Top 100 list; they’ve performed at the likes of Lollapalooza and SXSW. Are they content?