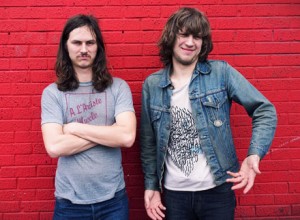 Jake and Jamin Orrall are brothers. As spawn of musical mastermind Robert Ellis Orrall, it’s not difficult to see why they eventually formed the duo known today as JEFF the Brotherhood. It’s also not difficult to understand why they’re so good at what they do, and seemingly without trying too hard, considering their extensive history with music. Though they were involved in other bands before, the bond of blood and beats proved an undeniable force. That shows in their ten-year history together and in the continual experiment that is their music.

Perhaps the most intriguing aspect of JEFF the Brotherhood’s sound is its unpredictability. Listening to their most recent album, “We Are The Champions” (2011), is a consistent waiting game, not only to see what the next song will sound like, but also what will change in each song individually. One moment the duo are beating their instruments to a pulp in a punk-like manner, the next they are gliding upon them in a blues-riff serenade, and so on. There are elements of psychedelic, punk, pop, blues and garage streaming in and out of each tune.

This sort of genre adventure isn’t as frustrating as it may sound, either. These shifts come swiftly and naturally. It sounds like (and probably is) an inherent part of their writing process; to fuse different sounds into one song. While it may irritate some that they can’t be placed in one category, that element may be exactly what has kept them together so long, and why they’ve continued to be a success in their field, whatever that may be. (Maureen Clancy)