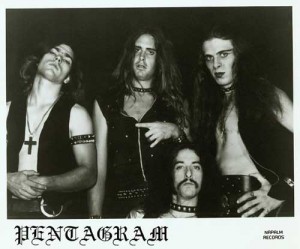 Pinpointing the birth of metal, and its subsequent doomy offspring, frequently falls upon the shoulders of just a few groups. Sabbath and Blue Cheer are rightly heralded. As is Virginia’s Pentagram. While this latter group aptly distills the aforementioned bands in their sixties incarnations, its singer, Bobby Liebling, chooses to emulate Cheer’s Dickie Peterson on the mic more so than his British counterpart. Arriving at an American confluence of psych-inflected guitar soloing, quick tempos and subject matter embracing evil women as much as an evil Lord should have resulted in Pentagram’s emergence as radio-regulars during the band’s heyday. It didn’t. The fact that the band’s held together in some form over the last forty years is a remarkable feat on its own, but especially considering the first decade of the ensemble’s career passed without any long-playing records. Liebling’s persistence resulted in the band carrying on into the eighties when Pentagram finally began issuing those long-awaited efforts. By that time, there was an even darker current at work, moving the band away from truck-stop hard rock and towards slowly developing, dirgey metal. Rerecording some of his songs, Liebling’s legacy becomes pretty easily understood when taking a listen to various renditions of “When the Scream Comes Out,” which is also the title of an upcoming concert DVD. Hearing a tough, hard-rock version from the band’s early days, replete with quick-step second verse, contrasts starkly with Pentagram’s 1987 update reveling in Sabbathian drudgery. It’s been the last decade, though, that that band’s refined its sound, recently issuing “Last Rites,” taken on a substantial fan base in the States and Europe, even touring with Chicago’s Nachtmystium a few years back. This jaunt through town finds Valient Thorr, JEFF the Brotherhood, and Beak opening. (Dave Cantor)