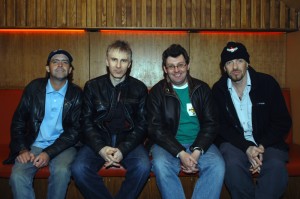 While the first wave of Brit-based punk groups had Thatcher and the dole to contend with, Irish musicians of the same era dealt with the Troubles, a quaint way of referring to religious repression. Compared to complaining about waiting in line to sign up for government programs, the Irish punk groups explored problematic bombings and a real possibility of there not being a distinct country to defend in the future. With those demanding political, ethical, and religious considerations, Irish punk groups somehow shared a taut popiness found in recordings by the Undertones as well as Stiff Little Fingers. It was this latter ensemble, lead by gruff throated Jake Burns, that created the most enduring legacy from a crew of Northern bands easily surpassing the flippant references to abortion and anarchy its London peers dealt with. No, SLF weren’t the Irish Clash, but a melodically adroit handful of players capable of working up interesting compositions—“Barbed Wire Love”’s introductory passage possesses more rhythmic acuity than anything major label contemporaries produced—but retained a dumb simplicity enabling the work to transcend the following thirty years. In the same way Brit groups felt a connection to plaintive Rasta singles being released by the island’s ex-pats, SLF took a go at a few Jamaican-styled tunes, the verbose “Bloody Dub,” a cover of the Specials’ “Doesn’t Make It Alright” as well as Bob and Rita Marley’s “Johnny Was,” none being particularly remarkable apart from the cross-cultural implications. After four studio albums, Burns disbanded the ensemble, only to resurrect it a few times over the years, most notably during the nineties with ex-Jam bassist Bruce Foxton joining the ranks. This current tour, however, reunites SLF’s singer and the band’s initial bassist, Ali McMordie. (Dave Cantor)