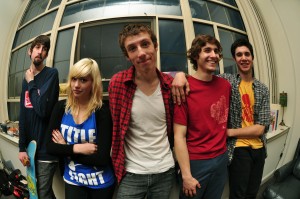 When Tigers Jaw’s vocalist Adam McIlwee croons “you are everything and I am nothing” on “Chemicals,” the fourth track on the band’s self-titled 2008 record, it can be very hard to stomach. There’s a terrifying level of teen angst ridden in McIlwee’s lyrics that have the potential to put many people off. Yet once you come to grips with the fact that they are a young, emotional band (I’m sure things are introspectively stressful down in Scranton, Pennsylvania), then there is a lot to enjoy in Tigers Jaw’s take on nineties college indie-rock. There is an unashamed nod towards “Something to Write Home About”-era The Get-Up Kids on the aforementioned self-titled breakthrough album. The mid-tempo instrumentation is punctuated by Brianna Collins’ subtle work on the keyboard whilst the layering of her singing over McIlwee’s complements his voice and gives the band an added dynamic in the vocal department. Tigers Jaw certainly broke no new ground on the release of that album in 2008 but, nonetheless, it was a catchy record worthy of repeated plays. With “Two Worlds,” their 2010 follow-up to the self-titled album, there was, however, little progression from the formula of bouncy, indie-rock with heartfelt lyrics. Despite this, there is enough passion and drive in Tigers Jaw’s live show to keep the sound and style of a decade’s old college rock band refreshing enough. (Ben Small)