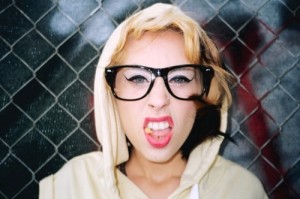 Ah, the internet again offers pop culture a would-be star, apart from an absence of all that hard-to-summon talent and unique vision. Kreayshawn, an Oakland-cum-LA MC, has been figured as an overnight sensation, like Cudi or Drake, since a video for “Gucci Gucci” became a sinkhole for online traffic. Thing is, just like those aforementioned big names, this MC’s been engaged with music-making for more than just the last few months. Regardless of the time she’s put in, portions of “Gucci Gucci” are pretty much snatched from an earlier work, “Bumpin’ Bumpin’” from last year’s “Kitty x Choppas,” a mixtape no one seemed to care about until relatively recently. Yes, the world is “One big room/Full of bad bitches,” but not so many to warrant the recycling of that phrase a scant year after first writing it. Kreayshawn’s earlier recorded effort, though, included a litany of ridiculous comedy, purposeful or not: “Wavey” goes so far as to extol the toughness of her cat while “I’m Moving” is objectively horrible and accidentally amusing with its production, pitch-shifted vocals and rhymes not qualifying as anything more than filler. It begs the question, in how many songs can one MC reference putting an animal in a bag? Critics attempt to saddle Kreayshawn with some sort of malicious exploitation of hip-hop and more broadly, blackness, while feminists simply take issue with some of her more carnal lyrics. But if anyone actually pays attention to what’s being proffered in her rhymes—trite rap clichés, one-dimensional discussions of material culture, and a distinct appreciation of smoking weed—it’s pretty clear that this is entertainment created by a music fan who just wanted to see what was possible. Apparently, mounting fame was the answer. (Dave Cantor)