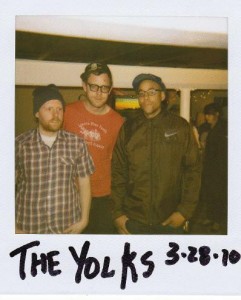 The Yolks are a Chicago punk group. Ta-da! There isn’t much to say past that. They’re not casting punk into revolutionary hyperspace, nor screwing punk over by crossing the “cool” line over to “lazy.” The Yolks seem to have a simple approach to their music: play well, have fun and make everyone kick-dance till it hurts. Their music is so unassuming, it’s impossible to hate them.

Singer Aaron Stringer’s voice is eerily similar to Julian Casablancas of The Strokes, with comparable muffled meowing techniques. The group is also a fan of distortion of all kinds, as it affects almost every aspect of their music. It perfectly accompanies the laidback garage-band sound, adding to the grind of their fast-moving grooves.

Seems like reason enough to check out their show at The Empty Bottle, right? Sure. Another reason, however, is to see if they live up to their own hype. Their website boasts that they turn “every show they play at into a party, and every party into [a] riot.” (Maureen Clancy)