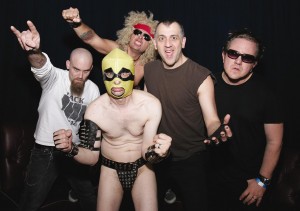 Ditching Chicago a few decades back probably wasn’t the worst idea the Dwarves ever came up with. Relocating to the Bay Area, singer Blag Dahlia, guitarist HeWhoCanNotBeNamed, and their rock solid rhythm section found a part of the country a bit less resistant to being attired in outrageous gear while performing live. Leaving the Midwest, though, also found the band eschewing some of its more garagey inclinations. Over the course of the band’s first album, 1986’s “Horror Stories,” the Dwarves do their best to summon updated understandings of the Sonics and some of the tougher “Nuggets” ensembles. Song run times were ridiculously short, most subsiding before the two-minute mark was reached. Punk-bacchanal eventually over took the Dwarves garage raunch, even as early career highlights are commonly rendered live in concert. With their new digs out west and a further embrace of punk’s quicker pacings, the band hooked up with Sub Pop before utterly alienating the Northwesterners after issuing the 1990 album “Blood, Guts & Pussy.” Of course, any label facilitating the release of a song called “Skin-Poppin’ Slut” shouldn’t be stunned to find purveyors of the composition to be less than traditional businessmen. With the coulda-been-big-time national exposure in its past, the Dwarves hunkered down and dispensed another few full-lengths before the nineties came to an end. Releases have been a bit slower in the new millennium, but no less ridiculous with the band’s latest offering, “The Dwarves are Born Again,” featuring a little person on its cover. Returning to its hometown finds the group headlining over local glammy-garage group Mickey, who’ve recently issued a debut LP through HoZac, and have been known to show up headliners in the past. (Dave Cantor)