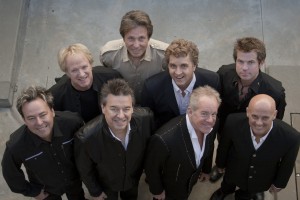 “I remember going to see the Chicago Symphony at Ravinia when the band was still at DePaul and standing at the railing,” recalls trumpet player Lee Loughnane of the band Chicago. “I was amazed with the brass section. I remember auditioning for the Civic Orchestra [the training orchestra of the CSO] and Adolph Herseth [longtime CSO principal trumpet] was right there, and it was like, ‘Oh, my God: I’ve got to play in front of the best there is?’ ”

Loughnane and his band mates from Chicago did eventually make it to the stage of Ravinia at the height of the band’s initial wave of popularity in August of 1972, but have not played the venue since. Late Ravinia executive director Edward Gordon described the aftermath of that concert “as if a B52 had flown by and dropped a ton of garbage over the park.” 1972 was a presidential election year and the first time that eighteen-year-olds could vote and the band members were huge George McGovern supporters: “Well, [keyboardist] Robert Lamm was,” clarifies Loughnane, “but the band went along for the ride.” Campaign literature and buttons were handed out, and there were voter-registration booths, something akin to post-Woodstock meets pre-Lollapalooza. The group’s big hit from that summer was the activist anthem “Dialogue,” which opened the show and the set featured a long avant-garde anti-Nixon and anti-Vietnam War stretch imitating air raids and sirens which Loughnane now characterizes as “a half hour when the entire audience could get up and go the bathroom.” 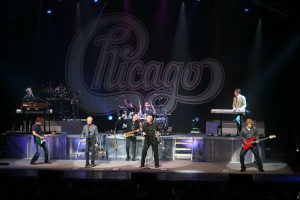 “It was the last rock ‘n’ roll show that Ravinia did,” says Loughnane, “but it was a full house and we made plenty of money for them to make up for it.” Indeed, the venue shied away from the genre for some years before making a gradual return to it in the form of nostalgic acts, which thirty-nine years later, is ironically what many consider Chicago. “Our manager Peter Schivarelli has been trying to get us back to Ravinia for probably ten years,” says Loughnane.

“In those days,” says Loughnane, “our material was new enough we would do every song from what was then the new album,” says Loughnane. “But now, with over thirty albums and seventy hits, if the band gave a show that was nothing but hits, we would still only be performing a third of them with no other material.” At one point, the band was even doing medleys to expedite so much material, but nowadays there is a more leisurely approach to accommodating the band’s vast legacy but making sure that “every chapter is well represented.” The band will have been together “forty-five years on February 12, 2012,” and is releasing “Chicago XXXIII,” the group’s third Christmas album which is produced by Phil Ramone, in October. And unlike the band’s last Ravinia appearance when Chicago was a rebellious band with a young following, the group’s multi-generational appeal should be very much in evidence. “We have outlasted record companies and venues; people have gotten married to our music, even conceived to our music.” (Dennis Polkow)