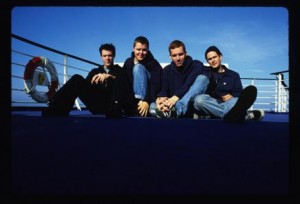 Following the successful reunion last year of Chicago’s seminal nineties emo band, Cap’n Jazz, it seemed only a matter of time before the city’s other genre stalwart, Braid, would also announce their return. Bob Nanna and co. return to the Metro (where their initial departing shows occurred way back in 1999) with the hope to recapture the energy of their brand of post-hardcore that became so influential long after their breakup.

The new EP that has been released to coincide with the reunion suggests the discordant angular sound and emotive shouting of “Frame and Canvas”-era Braid has been ditched for a softer sound and much more melodic singing, which bears greater resemblance to the poppier post-Braid project, Hey Mercedes. The dynamic guitar work of Nanna and Chris Broach, however, reminds us that we are still listening to Braid and that they’ve certainly still got it, despite the aggressive side of the band being toned down. A band of individuals that have been working on a number of other projects for the last decade can hardly be blamed to have evolved and matured their songwriting and influences; it would be unrealistic and unfair to expect “Frame and Canvas II.” And as Nanna revealed in a recent interview with Mixtape Muse, he simply can’t shout like he used to. (Ben Small)