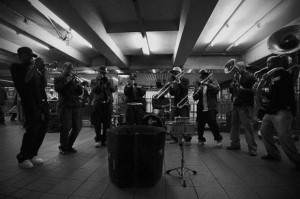 Even if the Hypnotic Brass Ensemble’s story of self-determination weren’t engaging enough and the music as full of swagger as it is, the fact that the band’s part of Phil Cohran’s legacy makes the entire thing seem mythical. Cohran’s history has been pretty well documented as part of Sun Ra’s cohort, then as leader of the Artistic Heritage Ensemble and mentor to a few folks in Earth, Wind and Fire. His children, who comprise Hypnotic,wisely haven’t made a habit of capitalizing on their ties to the past. Schooled during early morning practice sessions by their father, Hypnotic coalesced as fully formed players during the late nineties, performing on street corners and at El stops. The practice of impromptu performance wasn’t taken on as a result of gigs being scarce. Hypnotic’s formation, comprising a handful of trumpets, trombones, a sousaphone and a drum set, lends itself to showcases just about anywhere from thousand-plus-capacity halls accompanying Prince or Mos Def to your backyard. Such stunning adaptability is belied by Hypnotic’s singular vision while recording its own strain of spiritual jazz. With song titles like “Jupiter” recalling its spacey Chi-jazz lineage, the band’s still able to truck in updated, beat-heavy compositions. Over the course of its mostly independent releases, any mélange of NOLA funk and hip-hop finds itself insinuated into Hypnotic’s history. With a brisk release schedule, which includes an early career round-up on the London-based Honest Jon’s, the band’s recently made its aural antecedents crystalline on “The Heritage EP.” Reworking Outkast’s “SpottieOttieDopaliscious” almost seems overdue with the taut rendition included. Just as telling, though, is the band visiting a track off Madvillain’s 2004 album. What’s remarkable about these covers, and Hypnotic’s sound in general, is its ability to include current and past trends while still having it all come off sounding like the product of a family jam-session. (Dave Cantor)