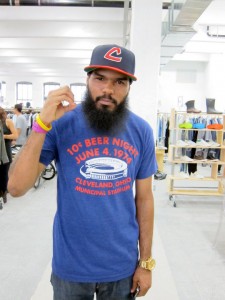 Ohio’s made some healthy contributions to rap culture. Really: Bone Thugs, Mood and Cudi. Stalley’s not a name that resonates in the same way as the aforementioned folks, but after issuing a pair of surprisingly cogent mixtapes and hitting SXSW last year, Rick Ross and his Maybach Music Group saw fit to sign the Massillon, Ohio MC to a contract. Beginning with 2009’s “MadStalley,” listeners were exposed to a sturdy flow positioned atop production not sounding too distant from the early nineties’ embrace of jazz samples. A minute-and-a-half-long track, “The Autobiography,” turns in a seventies, keyboard-focused beat while Stalley defines himself as a performer and a man: “I am mellow/I am hard as metal.” While that release didn’t bring the Ohio native to national prominence, blog-hype around this year’s “Lincoln Way Nights (Intelligent Trunk Music)” made the beardy MC a familiar figure. Videos for a few tracks, including “Slapp” and more recently “Chevys and Space Ships,” shined a light on Stalley’s hometown and the goings on in a moderately populated city distanced from Akron and Cleveland. Yeah, there’s a lot of talk about cars and showing off, but more importantly, the production Stalley turned to—and Ross unquestionably appreciated—arrived slightly different from that previous mixtape. Drum patterns on efforts like “Go On” still hearken back to a latter-day golden age, but are mitigated by surprising turns on “Assassin.” Beginning with what sounds like the innards of a clock misfiring, John Mayer crops up on the hook accompanied by some production flourishes more befitting nu-soul than anything Stalley’s worked on previously. That crooner’s sponsorship coupled with the pending reissue of “Lincoln Way Nights” as physical product might allow Stalley to impact that Forbes list ranking rich MCs. B.o.B.’s on there, you know? (Dave Cantor)