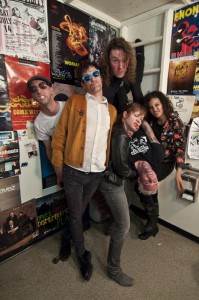 Tied to grunge in perpetuity, Seattle and the Northwest still deal in a wealth of revved-up pop music angled at punk updates. Detached from all recent Sub Pop singer-songwriter nonsense and faux-cowboy rock, the Briefs arrived around the turn of the millennium to dispense punk’s properly composed sucrose. After a few albums, the last couple on BYO, the band took a break. Pretty quickly, though, any given weekend night the Cute Lepers, a group headed by Brief’s honcho Steve E. Nix, might be found running through sets at the Comet or some other local dive. A handful of singles followed, and less than three years after the Briefs called it a day (temporarily?), “Can’t Stand Modern Music” was released.

The aural distance between the Lepers and the group that spawned it seems minimal at best. Over the course of the newer ensemble’s first album, though, a wider range of spunky Brit rock crops up; “Prove It” could pretty easily be passed off as an Elvis Costello outtake dating to 1977. “Adventure Time,” released this past spring, finds the Lepers embracing a larger ensemble sound with the inclusion of piano and sax. Of course, the approach would have worked equally well with the Briefs configuration, as lead-off track “Tribute to Charlie” amply displays. Pervasive Brit power-pop references persist, but with all those additional instruments, the Lepers wind up approximating an American Elton Motello—“I Can’t Do Things” coming as close to the foreigners’ “Jet Boy Jet Girl” as possible without the song simply being a cover. Regardless of which influences Nix and company seeks to foreground, his recordings continue to expound the virtues of all those first-wave punk groups, who were as concerned with succinct song-craft as they were with getting loaded. (Dave Cantor)