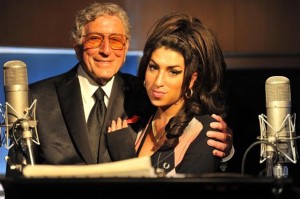 Anthony Dominick Benedetto, aka Tony Bennett, turned 85 earlier this month (August 3) but it’s hard to think of many other octogenarians still swinging the way that Tony is. Who else but Bennett could unite such diverse artists and icons for his 2006 “Duets” album as Barbra Streisand, Bono, Paul McCartney, Stevie Wonder, Sting, James Taylor, the Dixie Chicks, Elvis Costello, k.d. lang, Michael Buble, Tim McGraw, et al, to sing duets of the songs most associated with him over the last six-plus decades, not across coasts and even continents the lackluster way that Sinatra did late in his career, but one-on-one, live and in person alongside of him, working to make every phrase count?

Among the “newbies” contributing to Bennett’s follow-up “Duets II,” due out September 20, are Lady Gaga joining him for a rendition of “The Lady is a Tramp” and late British singer Amy Winehouse, who recorded “Body and Soul” with Bennett two months before her death, the last recording that she ever made. The proceeds for the single of that last Winehouse recording are being given to charity.

Remarkably, Bennett’s singing with more poise and musicianship in his twilight years than he has during a remarkable career that continues to have cross-generational appeal as he remains the greatest living interpreter of the classic American songbook.  How much longer Bennett can keep this up is anyone’s guess, but here’s for relishing in it for as long as we can. (Dennis Polkow)