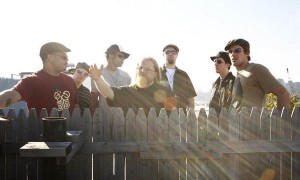 Sure, the first Lettuce album was titled as a joke—“Outta Here.” The fact doesn’t lessen the music’s funky impact, though. Comprising a handful of players engaged with Soulive and any number of groove-related revival projects, Lettuce ranks as an enduring live act. Dating back to that first 2002 album, Lettuce was decidedly aware of its on-stage prowess. Of course, the ensemble was able to pull in Mr. Fred Wesley, best known as James Brown’s trombone player, for contributions on the slinky “Superfred.” The track, with its wonky, one-note guitar vamp, allows the band to rave up a three-note progression for Wesley to blow over. So late in the man’s career, the fact that his performance graced such a recording should explain not just Lettuce’s cachet in the funk scene, but its ties to vintage musics. All those Tower of Power records are surely sitting front and center on band members’ turntables. But “Outta Here” moves well beyond staid studio confections with the closing, live rendition of “Nyack.” Yeah, a four-minute studio rendition is included a few tracks earlier, but the much-expanded performance of the song hints at the group’s live shows with speeded-up pacings and surprising interplay between instruments. At the time of the album’s release, there was a wealth of touring funk acts gesturing in a manner meant to enliven seventies instrumental workouts. Most just weren’t as tightly drawn. Nine years later, Lettuce only has a pair of additional live recordings and one more studio release under its belt. But the band is appearing in conjunction with the North Coast Music Festival, which sports a predilection for live bands making electronic sounding dance music (STS9 most egregiously), so it makes a set from Lettuce even more engaging. Soul Rebels Brass Band opens with an updated NOLA sound. (Dave Cantor)