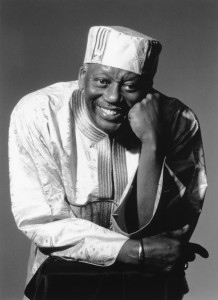 If you’ve spent any time digging through crates of used jazz albums (and you should have), the sight of pianist Randy Weston’s tripped out, electric-azure “Blue Moses” should be a familiar sight. Recorded during the early seventies for Creed Taylor’s CTI imprint, the disc graces pretty much every cutout bin in the country. It’s not for lack of vision, but Weston’s combination of Afro-centricity, Latin rhythms and bop found better articulation on other outings. As early as 1964, the band leader was coaxing Afro-themed bop and blues from ensembles counting underrated players like Booker Ervin, but finding distribution a difficult proposition. A few trips to Nigeria and Morocco, however, solidified Weston’s resolve when he returned with “Tanjah,” the follow-up to “Blue Moses.” Over the course of the disc’s first three tracks, Weston amply distills his unfettered perception of various jazz strains. “Hi-Fly” begins in a manner befitting a Logan Square block party with chording to support the band’s horn section blasting away. If the track’s not a danceable jazz tune, there’s no such thing in existence. Pulsing bass opens “In Memory Of,” which quickly disposes of acoustic instrumentation as Weston plunks down endless lines of round electric piano tones. Under four minutes in duration, “Sweet Meat” turns in a languid big band feel, not detached from the earlier two tracks, but clearly beholden to Count Basie more than latter-day boppers. The title track comes a bit further along, and while it’s still an interesting East-meets-West confection, after that opening trio of songs, nothing’s really a surprise. Joined this Thursday by the Chicago Jazz Ensemble, any number of these musicological combinations are possible. And hopefully, each finds a proper airing. (Dave Cantor)