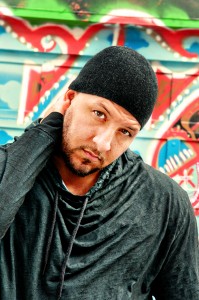 “It’s funny, when you’re living through history, you don’t think of it as such,” postulates Lateef the Truth Speaker, who alongside Lyrics Born constituted the mid-nineties East Bay hip-hop group Latyrx. “The Grouch, Sunspot Jonz, we all went to high school together. I remember listening to music and having debates with Opio about whether or not Das EFX were really fresh or if it was just a gimmick. The [self-titled] Cypress Hill record came out at about the same time. I was like, ‘This shit is dope. It’s kinda gangster, but still talks about society.’”

The early nineties were a heady time in music generally, but specifically for hip-hop. Expanding the lyrical and sonic possibilities of the music, A Tribe Called Quest and the Pharcyde helped inform a second wave of MCs intent on further pushing the edges of what rapping was and could become. Recently, it seems almost every year an album’s released and touted as a new benchmark for experimentation within the hip-hop community. But in 1997, when Latyrx released “The Album,” there was actually no proper antecedent for what Lateef and Lyrics Born concocted.

“We were all being experimental, but we weren’t the same,” Lateef says of his East Bay constituency which included the Hieroglyphics Crew as well as Living Legends and his own Solesides/Quannum clique. “There was community and people started following it. None of us were really aware of what was happening.”

What was happening was five-plus-minute excursions on the duo’s album. Disregarding song structures, Lateef even admits to thinking “fuck pop music” in the past. Titling a song with the name of a group seems odd, but hearing the track “Latyrx” is plain bizarre. Over production composed by DJ Shadow, both Lateef and Lyrics Born rap simultaneously, creating an interwoven oddity no other pair has approached since. Occasionally, the MCs trade off words, or even land on the same one for a moment. But for most of the song’s almost six-minute run-time, it’s difficult to figure out what’s going on—unless, of course, listeners pan their speakers to one side or the other, isolating one MC’s voice.

Releasing a wildly creative long-playing record and subsequently turning to other collaborative endeavors hasn’t left too much time for Lateef and Lyrics Born to work together during the last fourteen years. That was a shrewd business decision, though.

“If you notice, we don’t tour together that much,” the MC says. “We wanted to save it for when we decided to do the Latyrx thing again.” It’s not just a few festival appearances Lateef alludes to, it’s the duo’s second act. “We’re going to do a mixtape and an album. Now you’re going to see us touring together with a fourteen-piece orchestra and a DJ. We’re trying to do the epic songs, we’re doing ‘Latyrx’ live,” Lateef says.

Disregarding hip-hop templates and working up those singular songs required taking on the business side of music distribution since Latyrx didn’t seem poised for a Bad Boy Records’ deal. The Solesides imprint, which was eventually renamed Quannum, was born. “I was a little bit younger,” Lateef remembers. “It was mostly Chief Xcel and Lyrics Born who were the driving minds behind the label. But, via osmosis, I absorbed a ton of experience on how to make a record work.” Synthesizing that knowledge came into play for the Bay Area MC while attempting to broaden the sort of music he’d broach in the future.

“The convergence of where you were when you put out that last record, where your fans are and where everybody goes afterwards,” Lateef philosophizes, “…some people are going to be on the same path as you. Some people aren’t.”

The pending release of “Firewire,” Lateef’s latest solo foray, is a further flowering of the recent MC as vocalist trend in hip-hop. It’s not that this Bay Area rapper makes sure to fall in line with what’s happening in the genre, but eventually a love of Stevie Wonder and other crooners was destined to impact his work. Crass consumerism isn’t the goal, but pragmatically, Lateef knows that his fan base is an ever shifting handful of music patrons.