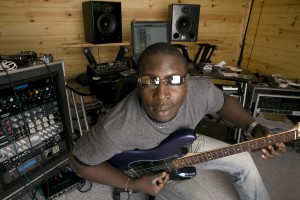 When Vieux Farka Toure first played in the United States, he followed the usual West African formula, using a supporting guitarist, percussionists and other instruments. It gave Toure the freedom to exercise his vocal chops in addition to the guitar technique of fast notes that make up the jam-friendly groove of Malian blues.

But on the current tour in support of his latest release “The Secret” (Six Degrees)—which boasts contributions from none other than jam-band extraordinaire Dave Matthews, guitarist Derek Trucks and Ivan Neville—he decided to strip things down. Backed solely by Mamadou Sidibe on bass and drummer Tim Keiper , Toure seems closer to indie rock than ever before. Sure, the elements of his signature sound are still there, but the time he has spent in Brooklyn seems to have given him a rockier edge. He now uses plenty of guitar-rock-influenced solos, and also adds a few English-language words to his tunes.

Not that there is really a language barrier. Toure has enough charisma and flair (some call him “the Malian Jimi Hendrix”) to transcend any need to understand what the words mean. Listen long enough and you will get it—it is little wonder that he is equally comfortable playing in World Music-friendly markets like Chicago or New York or Asheville, North Carolina. Because he is that good. (Ernest Barteldes)