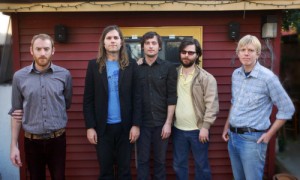 If there’s one band out there to induce a big dopey smile on your face, it’s the Fruit Bats. These Chicago folk rockers are masters of being breezy, led by singer/songwriter Eric D. Johnson, a former instructor at the Old Town School of Folk Music. They’re bringing it all back home on September 8, with a new album, “Tripper,” in tow.

If there was ever a band built specifically for long-winded drives through patched Illinois cornfields, it’s the Fruit Bats. The further south you go in this state, the stronger the country presence gets, in music as well as lifestyle. The band conveniently parallels this transition—a honky-tonk twang is partially responsible for their inherent cheerfulness. The group never does go full-on country, but teases you incessantly, wavering between indie and country, never settling in one area for too long before moving again.

Let it be known, though, that the Fruit Bats don’t tell tales of cheatin’ queens, beer and red dirt roads. Their lyrics are at times playful, but also strongly connotative. Be careful not to be swept away by that singing fiddle, because out of nowhere, they’ll throw you a lyric for pondering: “God’s not better than you,/just bigger is all.” (Maureen Clancy)