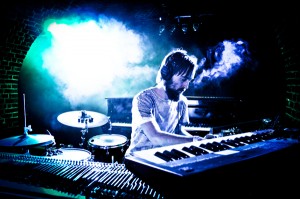 The most scant scent of hip-hop wafts off Martin Dosh’s percussion work and functions as the main building block of his compositions. As a multi-instrumentalist dealing in loops, drumming is a sensible starting point, but most every other element in his trick-bag seems pulled from hushed avant-corners of the recorded world. Coming out of a fertile but low-key rock scene in Minneapolis, Dosh did a bit of time in Fog before heading out on his own, performing shows encircled by a drum-set, electric keys and various noise makers and portable instruments. Hooking up with the left-coast Anticon imprint resulted in one of the label’s earlier forays into music less strictly influenced by EPMD or any number of old-school heroes. In some ways, Dosh and his first album, a self-titled effort from back in 2002, could be used to better understand later works by Why? and his ilk. Hip-hop’s history is firmly embedded in efforts like Dosh’s “Song For Zelbert Moore.” Overriding the boom-bap and its centrality, though, are lightly plunged keys and some of the more ambient sounds a keyboard might be capable of whispering. The fact that these disparate elements are being layered and mixed live has a great deal to do with ties to the States’ last great musical innovation, but Dosh’s touring partners—everyone from Andrew Bird to Black Moth Super Rainbow—have set this performer firmly in the indie realm. Though Dosh’s music has ceased being ruthlessly new, last year’s “Tommy” was a sensible if unsurprising continuation of the drummer’s unique style. What he is able to transmit emotionally through looped drum beats, hordes of samples and tiny instruments speaks as much to his talent as his inspiration. He’ll be back toward the end of the month performing at the Hideout Block Party. (Dave Cantor)