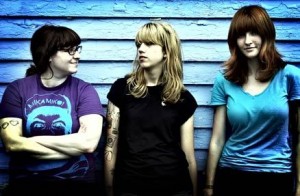 It can be incredibly patronizing to discuss a band by the prevailing gender of their members, but with Vivian Girls the 1960s “girl group” style that the band certainly draws inspiration from is an important crux of their sound. The harmonized vocals are at the forefront of their music, against a backdrop of steady beats and with a more contemporary take on a garage rock sound. Despite this influence, the lyrics of Vivian Girls eschew the formula of their 1960s foremothers, whose archetypal character in the lyrics was that of the desperate and dependent girlfriend rather than the dominant and often disrespectful male subject. Rather, they adopt a form of feminism that bears more resemblance to the riot grrrl movement that began in the early 1990s. On the band’s latest release, “Share the Joy,” when guitarist and vocalist Cassie Ramone sings “I don’t want to be like the other girls” in “The Other Girls,” there is a rejection of mainstream interpretations of women, a far cry from the “will you still love me tomorrow?” ethos of those before. Vivian Girls continue to exude the same energy that saw them explode onto the Brooklyn music scene back in 2008; a punk attitude and sound that their city kinsmen, Ramones, would be proud of. (Ben Small)