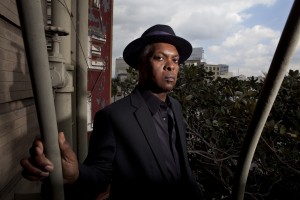 Otis Redding might still be the most recognizable voice and face affiliated with Memphis’ Stax imprint, but there’s not another musician who better exemplifies the label’s sound than keyboardist Booker T. Jones. He, along with guitarist Steve Cropper, laid out the ground-work for later confluences of jazz, blues, funk and soul music as the main songwriters in Booker T. & the MG’s. Functioning as the Stax house band and backing up a wealth of singers, the MG’s slunk their way into the American consciousness for the better part of two decades.It’d be difficult for even the most hardened curmudgeon to not at least recognize the main riff to “Green Onions” or to nod along with “Slim Jenkins’ Joint.” Issued on 1967’s “Hip Hug-Her,” the latter song bounds along as rhythmically engaging as any Meters’ track without becoming willfully concerned with hitting an indisputable melodic section. Sure, Booker T. solos a bit, but the entirety of the song isn’t about melody or funk, it’s about the creation of solid ebb and flow. Disbanding the MG’s during the seventies allowed for Booker T. to work behind the scenes, but over the last few years, he’s been consistently writing music, releasing work through Anti-Records and touring. On last year’s “The Road from Memphis,” he even includes a vocal cut on which the keyboardist discusses his upbringing. What’s astounding fifty years after the first MG’s long-player is that the instrumental offerings on Booker T.’s latest disc retain the same sort of effortless and endless boogie as his older work. It’s in part due to wrangling various players from the Roots as well as guitarist Dennis Coffey into the studio. But at this late date, it seems as if Booker T. can perform in just about any situation and find a fitting groove. Also performing at the Hideout Block Party are acts as dissimilar as the Eternals, Dosh, Big Freedia and White Mystery. (Dave Cantor)