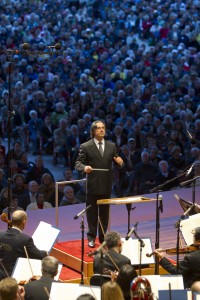 Entering Chicago Symphony Orchestra music director Riccardo Muti’s dressing room on a quiet evening before the next day’s first rehearsal of the 2011-12 season, there is a new shelf on the wall with two new possessions courtesy of his new partnership with the CSO: two Grammy Awards.

“They look nice there, don’t you think?” Muti says, looking quite relaxed in a dapper three-piece gray suit and open collar, hospitably offering up chocolate given to him as one of a myriad of presents for his seventieth birthday, which was July 28. Although Muti was conducting Verdi’s “Macbeth” in Salzburg over his birthday, he did announce that after forty years of conducting summer operas there, he would no longer be doing so. “I said if you want to hear me do opera, come to Rome where I will do them on the stage, or to Chicago, where I will do them in concert.”

As anything to do with Muti, much was made of this, the speculation that he had grown tired of fighting with directors that created concepts that ran contrary to the music. “I am tired,” Muti admits. “I am tired of not watching the tress over forty summers. Is it a crime to want to spend some time for me? I also have the right to lie on the beach, no?”

Prior to the start of the season, the Chicago Symphony went on its first European tour with Muti as music director, experiencing frenzied audience reaction reminiscent of  the first European tour the orchestra made forty years ago with then-music director Sir Georg Solti. “Every concert was better and better,” assesses Muti, “and a great success everywhere. It seems like this marriage is working well. ‘So far, so good,’ as the British would say.”

As last year, Muti’s first CSO concert of the 2011-12 season will be a free concert open to the community at large. But unlike last year, where the concert was held in Millennium Park, virtually the front yard of Symphony Center, this year’s opening concert will be held at the Apostolic Church of God in the Woodlawn neighborhood on the  South Side. 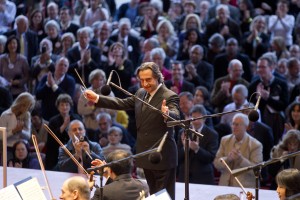 “One of my ideas when I first came here was to bring music to areas of the city and to people that are not close to Symphony Center, to go out to the people and invite them to come in and have contact with us and to have a new experience. More and more I think that the system that we still have today where a formal public comes into the concert hall and finds the orchestra and the conductor in tails represents, if not a dead world, a world that is far, far away. So, I think that this ‘ceremony’ should at a certain point be changed. I don’t know yet how this would be possible. It’s not only the tails, because you can take those away and still put on something sophisticated, no? To have a concert where the orchestra, the soloists and the conductor can all communicate somehow.

“One time in Ravenna, I had the orchestra onstage and was explaining the beginning of the Seventh Symphony of Beethoven. ‘This opening chord,’ I said, ‘you can do it in so many different ways: ‘secco,’ or dry, short. Or roll [the notes], or a deep, long approach or in a short sort of philological way, abrupt.’ So I asked the public, ‘Now you hear these are different, what do you think? Which one do you prefer?’ And the public becomes immediately involved and everybody becomes an active element of the performance and then when you repeat the performance, everyone recognizes what has been heard. Of course, this is theoretical, you cannot do this every night. But this is one possibility to help people walk in this beautiful forest of sounds. I don’t think to lecture the public, ‘This symphony was written by Beethoven in the year such and such. It was made in four movements, the first movement is Allegro.’ This is nothing.”

Muti is also commemorating two composer anniversaries in his fall residency, the bicentennial of Franz Liszt and the centennial of the death of Gustav Mahler. “For 200 years of Liszt, we are doing the same program that the orchestra did with Frederick Stock a century ago to celebrate the Liszt centennial, including the ‘Faust’ Symphony with an incredible finale where tenor and chorus sing words of Goethe.”

For the Mahler death centennial, Muti will not be performing the music of Mahler, but rather reconstructing the final concert that Mahler ever conducted a century ago. “This was the last concert of Mahler’s life,” says Muti. “He went back to Vienna and died. As music director of the New York Philharmonic, he chose a complete program of music of Italian contemporary composers. He used the Mendelssohn ‘Italian’ Symphony because one of the composers didn’t write the piece that he asked for, but it was clear that he wanted to have a contemporary Italian evening. Incredible, and this tells you everything about Maher. Not only was he a great composer, but he was interested in all of the music around him. As a conductor, he conducted contemporary music, but also ‘Cavalleria rusticana’ and ‘Pagliacci.’ He had a large spectrum view and not only did sophisticated music, but Mascagni, and Leoncavallo.”

All of which raises the obvious question of why not conduct Mahler’s own music, especially when you are the music director of what many consider the world’s greatest Mahler orchestra?

“Everybody conducts Mahler,” says Muti, “not because it is his anniversary but because he is very fashionable today. However, when I saw [Christian] Thielemann in Dresden on our tour, he said, ‘I don’t conduct Mahler.’ As for me, I do the First and the Fourth, and at some point we will do those here. I like the lieder and the way Mahler uses the voice, it’s incredible. With the symphonies, I have some problems. Sometimes for ten minutes of paradise, you have twenty minutes of—well, something else, I don’t know what. With Bruckner I find a world that speaks to me, but Mahler you must ‘feel’ to do him. If not, there are so many young conductors who do Mahler because the finales will always get you lots of applause.”

A composer anniversary taking place this year largely unnoticed but that has great personal significance for Muti is the centennial of his teacher and mentor, Nino Rota, whose music will be performed Friday afternoon at the first CSO subscription concert of the new season.

“Nino Rota was a great composer as well as a conductor who studied with Toscanini. He is generally famous for scoring Fellini films, but he wrote many operas, concertos. He is, as you know, responsible for my being a musician today. We are doing a suite from ‘The Leopard,’ which was done for Visconti, a great director and a masterpiece of a film. Rota told me that he was so close with Fellini, that they thought the same things. When you see a Fellini film you think of Rota music, and the other way around.

“But apparently with Visconti, Rota proposed several melodies several times, and Visconti  was never happy. So one day Rota decided that he was going to go away since nothing was working. He was in a room waiting for Visconti because he wanted to tell him and Rota improvised all the time so he was sitting at the piano and was waiting for Visconti who came in, ‘What is this music?’ [Muti plays it at the piano.] ‘Which music.’ ‘What you’re playing?’ ‘I am not playing anything.’ And that became the theme. You hear many times this wonderful theme, harmonized etc. And that is how this wonderful music was born!”

For Saturday night’s Symphony Ball, Muti is spotlighting “The Four Seasons” ballet music by Verdi written for “I vespri siciliani.” “This is the most important symphonic music Verdi wrote,” says Muti, “but every time they do the opera, they cut the ballet. I don’t know why. It is a grand opera and grand opera means the ballet is included. When you take it away, you take away a half hour of beautiful music. It’s not grand, it’s just an opera.”