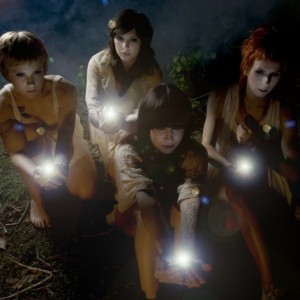 Songs from Frankie Rose and the Outs aren’t any more tuneful than those from either the Vivian Girls or Dum Dum Girls. Of course, that latter group might only be meaningful to listeners as concerned with what their favorite musicians are wearing as they are with the music’s quality. But as a drummer for both those latter ensembles, in addition to the vastly more engaging Crystal Stilts, Frankie Rose has displayed a penchant for updated garage and girl-group stuff. Varying only slightly from band to band, it’d seem that the basic formula for these ensembles almost defies founding individual groups. Doing time behind the kit in Grass Widow may have been the most unique-sounding excursion for Rose thus far. But hopping out from behind the drums and gripping the mic to sing along to more simple rock ‘n’ roll hasn’t been a bad decision. What all these groups, save the Widows, lack in utter originality, in some ways is made up for by Rose’s determination to do as much as she can with a sliver of rock’s history book. The tremeloed guitar solo on “Girlfriend Island,” from the Outs’ eponymous 2010 disc, stakes out unsurprising territory while “You Can Make Me Feel Bad” and its dogged simplicity might surprise some folks. Femme-pathos notwithstanding, “Save Me” closes out Rose’s first long-player in serene scuzz as the song’s telegraphed opening gives way to a one-note jive worthy of its noisy predecessors.  For the most part, though, if the last ten years’ worth of garage retreads have been to one’s liking, Rose and her troupe won’t disappoint. Dirty Beaches’ dusty weirdness opens the show. (Dave Cantor)