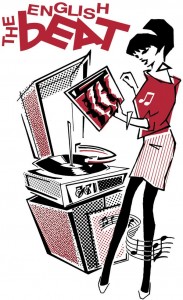 Despite the regrettable formation of Fine Young Cannibals subsequent to the English Beat’s breakup, the earlier band became one of the most visible and successful ensembles from the 2-Tone era. Charting in the States didn’t provide for a prolonged career, but the Beat was able to squeeze out three long-players before going their separate ways. The first disc, 1980’s “I Just Can’t Stop It,” worked to incorporate roughly the same musical elements its 2-Tone peers dealt with. But instead of attempting to mash each disparate influence into a single song, the Beat went ahead and recorded some straight ska tunes, some in a reggae vein and even a pair of overtly punky numbers.
“Click Click” clocks in at a minute and a half, sports a frantic bassline and comes off as an effort the Police were aiming for, but incapable of summoning. The song’s pacing matches just about anything from punk’s first wave and is able to deal with burgeoning racism in the UK, particularly relevant to this multiracial band. Saxa, a sax player who recorded with Prince Buster, was a member and likely explains why a pair of the Jamaican singer’s tunes are adapted on the 1980 album. “Rough Rider” isn’t about horses and “Whine and Grine” details what it should. The latter tune as rendered by the Beat includes a coda titled “Stand Down Margaret,” another political tirade from the Thatcher era. How real the prospect of World War III was at the time can’t be properly calculated at this point, but the Beat’s persistent rallying for peace ranks as a significant part of the 2-Tone movement. “Two Swords,” the crew’s other quick-step rock track, laments racially motivated violence and somehow makes the word “Nazis” a fun syllable to harmonize. Reunions are dicey affairs, but Madness doesn’t seem ready to hit Chicago as of yet. (Dave Cantor)