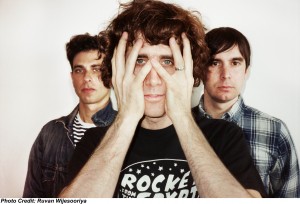 The Rapture is coming your way, and you better be ready to dance. The New York indie rockers pioneered dance-punk in the early 2000s under the producer’s eye of a pre-LCD Soundsystem James Murphy, with songs like 2002’s “House of Jealous Lovers.” They were at the forefront of experimenters that melded house and disco influences into rock songs, interspersing vocal hooks and guitar riffs with synth, cowbell and saxophone, looping and mixing them together with a hefty dose of funk. When they sing “People don’t dance no more” on their 2006 single “Whoo! Alright, Yeah… Uh Huh,” they’re throwing down a challenge.

After a five-year recording hiatus, they’ve just released their fourth album, “In the Grace of Your Love.” The band’s future was fairly uncertain for a bit there: after his mother’s suicide, vocalist and founding member Luke Jenner quit the band and returned a few months later, only to have bassist Mattie Safer leave in 2009. Going on as a threesome, they’ve left their major-label stint at Universal to return to Murphy’s DFA Records. Their latest tracks lack some of the punch of Safer’s basslines, but a departure from the sunshine-infused sound of their last record, “Pieces of the People We Love,” isn’t so bad. They have their introspective moments, but they’re still going to break out their funky white-boy dance moves for the world to enjoy. (Shaunacy Ferro)