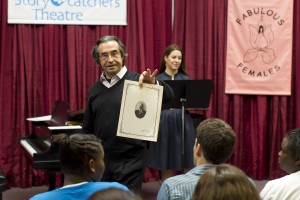 The Gospel of Matthew states, “I was in prison, and you visited me.” It’s an adage Chicago Symphony Orchestra music director Riccardo Muti takes very seriously. He has visited prison a number of times in his native Italy, and during the first days of his inaugural season last year as music director it was a top priority for him.

“The experience was wonderful, fantastic,” Muti said of his first visit to the Illinois Youth Center in west suburban Warrenville, an incarceration facility for female juveniles, where he gave a concert and first visited with the inmates in September of 2010. “They were so nice and so taken with what we were doing: they even prepared a cake for me! When I had my accident in February, I received several letters from these girls with designs and sketches and best wishes: I was very moved, it was incredible. So, I decided to go back. I would like to go to other places as well, not always to the same place, but this time I decided to go back because only one time is not enough, no? Otherwise it becomes a voyage from one prison to the other. So, to cement our relationship, I am going back. Would you like to come?”

An unexpected invitation which could not be refused, and so I became part of a small group that accompanied the Maestro last Sunday afternoon to the IYC in Warrenville. Security clearance was needed, and no objects of any kind could be brought in to the facility, not even a wallet or a cell phone. However, you needed a photo ID to enter the chain-like gate, where visitors are greeted by an inanimate voice that buzzes you in once you identify yourself and your purpose and you’ve been checked off of a carefully monitored list.

Muti went wandering around the library and an exhibition of art by the girls before he made his way to a small institutional-like room of brightly painted brick walls with overhead florescent lighting and homemade signs that greeted, “Welcome Maestro.”

The “girls,” as a facility memo says is the preferred term because the offenders are juveniles, were getting ready to put on a musical-theater piece in November that they wrote and are performing themselves. They performed a piece from their work, an ensemble number entitled “Incarcerated Girls,” that speaks of their situation with a pop Broadway-style refrain chorus. They also performed a Latin choral setting. Muti sat and listened to both very intently before taking the stage himself.

“Very nice, congratulations!” said Muti. “Your Latin pronunciation is very good, this is often an issue with professional choruses. Do you remember me? You know, I was so excited to be here the last time that I became sick afterwards,” he said to laughter. “But I am in very good health now and so happy to be back with you.

“Everything we are doing for you today is about love,” Muti said wide-eyed and hand-gesturing. “Music without love is just noise: you cannot make music without love. How many of you have heard of Mozart?” Muti asks, as some hands raise. “Si, si,” he says, acknowledging each hand individually. “You know, he may be the greatest composer who ever lived and is a demonstration of the existence of God in that he spent such a short time here—he died very young—but never wrote music that was cheap. He had a very hard life, he traveled all around Europe but he couldn’t get a job because the jobs were always given to others of inferior quality. It is often the case, even today, that those with inferior talent are the ones who get the jobs.

“This aria is from ‘Così fan tutte,’ which translates to, ‘All women behave in the same way.’ Of course, in this opera, as in real life, the men act the same way as well! The real title should be, ‘We all make the same mistakes.’ This music is very joyful, no?” Muti asks, as he sits at the piano and plays the introduction to “É Amore un ladroncello” with a light and delicate touch. “It teases you, it goes along joyfully,” he says, continuing to play, “and then comes doubt, expressed in the music,” he says, as the piece displaces an expected major chord with the instability of an augmented triad. “Can you hear that?” he asks, and most of the girls shake their heads and respond in recognition. “Bravi, because I needed three years to understand this.” 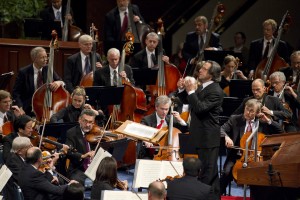 At the Apostolic Church of God/Photo: Todd Rosenberg

Introducing a song by Tosti set in Muti’s native Naples—“not Florida, Italy”—he says, Muti makes a similar point by showing how the music “puts the sea in front of you, no?” as if smelling the sea air while playing. The music shows the “sun and sky as well, but suddenly there is a cloud,” he tells the girls. The girls, whose world is behind walls and who sing of incarceration, sat transfixed as Chicago Symphony Chorus member and CSO Teaching Artist Sarah Ponder (mezzo-soprano) sang “Ideale” with Muti accompanying her.

When the program was over, there was no shortage of questions. “How do you do it?” one of the girls asked Ponder, “you know—sing like that.”

“I practice every day,” Ponder said.

“Work or nothing will come,” added Muti. “The problem is that you can work and society can still be unfair. You can have inferior talent and have a major career, or be a person of immense talent and can sit in the corner.

“My father, who was a medical doctor, wanted my five brothers and I to study music not to become professional musicians, but for the joy of learning music. When I was eight, instead of the usual Christmas gift that you might give to a young boy, I received a very small violin. I was very disappointed because, like my brothers, I wanted to play football [soccer]. It was very slow but I scratched out some sounds and eventually started to love it. And then my father said, ‘It is better that Riccardo stop studying, he is making no progress.’ It is so easy to get discouraged.”

“Why do you always smack people?” asked one of the girls concerning Muti’s Neapolitan habit of touching cheeks with his open hand.

“It is affection,” Muti said. “Do you like me?” When they reply “yes,” he asks them, “Would you like to try?” walking over and crouching down, offering up his face to be patted by the questioner, and anyone else who likes. There are titters and giggles. “If you like me, I will come back.”

One girl near the back says under her breath, with a sigh and sense of disappointment, “I might be out by then.”

At a reception area where the girls have made Muti a rectangular cake still in its pan, Muti cheerfully takes a corner piece onto a paper plate, takes a taste with a plastic fork, and tells them, “this was a better cake than we had last night [at the Symphony Ball].”

The extraordinary day is the end of an extraordinary first week of a new CSO season—Muti’s second—that had begun in the Apostolic Church of God on the South Side last Thursday night, where Muti gave a free concert to an overflow crowd estimated at 5,000 people.

“We come, not just to play a concert, but to share our feelings, love and friendship,” Muti had told the crowd. “In music, there is nothing to understand, only to feel, and feelings are the same for all people. The heart has only one color, the color of the soul.”