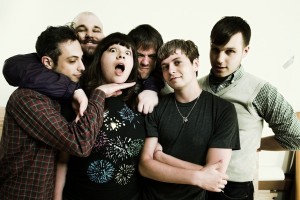 Canadian hardcore punks Fucked Up have had an intriguing rise to fame. In their early career, they released only very limited-run seven-inch records and played basement shows in their hometown of Toronto. Nowadays, they are receiving coveted Polaris Music Prizes and releasing modern interpretations of the rock-opera format with this year’s “David Comes to Life.” They’ve managed to become a “hardcore band for people that don’t generally like hardcore,”  as reflected in their signing to the indie-rock label Matador Records and their collaborations with the likes of Kurt Vile, Tegan & Sara and even Moby, who joined them on stage to perform a Ramones cover during the twelve-hour set they performed in New York City in 2008. Regardless, they have certainly earned this position at the forefront of modern hardcore. They did their groundwork in the underground scene before developing their music in such a progressive and expansive manner—refreshing when many modern hardcore bands are carbon-copy regurgitations of any Minor Threat or Black Flag song.

“David Comes to Life” tells the tale of David, a factory worker, falling in love with a girl named Veronica in the fictional town of Byrdesdale Spa in 1980s Thatcher-era Britain. Needless to say, not everything about the relationship goes as planned. The story is convoluted and as pretentious as any concept album that came before it yet, the ostentatious ideas of Fucked Up are second to their delivery throughout the eighty-minute opus. The six-piece can conjure multilayered onslaughts of carefully constructed noise or simpler pop melodies that continue to grow and build as songs progress. The only aspect that remains a reliable constant is the gruff shouting of vocalist Damian Abraham, a.k.a. Pink Eyes, which gives Fucked Up their instantly recognizable sound. It is Abraham who has remained the focal piece of Fucked Up’s live shows. It is through his larger-than-life build and endless energy and charisma that Fucked Up forged a name as a must-see band. He bounds around the stage, more often than not shirtless, picking up unaware crowd members to carry around. He eschews any notion of the stage as a place for performance, using every corner of the venue to bellow his lyrics. Abraham is certainly someone to behold. (Ben Small)